The moment you’ve all been waiting for is almost upon us.  The IT Crowd 4.0 hits your tv screens from June 25th courtesy of Talkback Thames and Channel 4, and we’ve got a whole week of articles based around the misadventures of Jen, Roy, Moss, Douglas, Denholm and dear ol’ Richmond to make those final few days of cold turkey go by that little bit smoother. 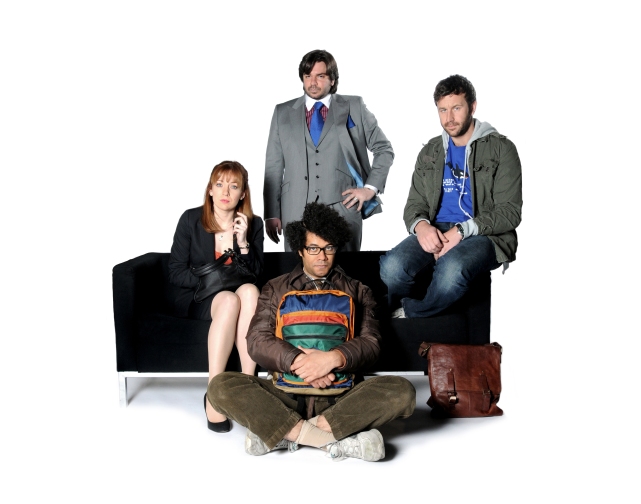 And we’re in for some real treats this year – as Jen applies for the post of ‘Entertainment Manager’ of Renholm Industries, Moss becomes a record-busting champion on a popular daytime quiz show, Roy garners the unwanted attention of a male masseuse and Denholm joins the ‘Spaceologists’.  Plus there are misadventures of a Dungeons & Dragons nature, and a few surprises along the way that are more than worth the wait!

Of course, if you REALLY can’t wait, episode one is now available for viewing online via 4OD.  Just click here to see it! But however you chose to watch the new run, we hope you enjoy our offerings to celebrate the show’s return.

According to series creator, writer and all round comedy legend Graham Linehan, the template for series four was simple: “There’ll be no hugging, no learning, no character arcs, and no one gets any wiser.  I’ve tried to continue on the idea that Roy, Moss and Jen are becoming better friends and are enjoying each other’s company a bit more.”

And whilst he’s enjoying making the show, its perhaps best to savour it whilst we still can, as Graham strongly believes that shows should end at their peak: “They [sitcoms] reach a point of perfection and then after that they fall away.  Seinfield around series 5 was juts glorious and then it started getting crazier and sillier until there was a sense that they were sticking anything in that felt crazy. I think its a good idea to get out before that stage.”

Thankfully we have another series confirmed, so at least we have twelve more episodes to savour!  This is, as Linehan is quick to point out, down to the great cast at his disposal, but also due to the methods in which the show is written that may differ from other, more conventional sitcoms: “When people come in and they’ve got it all worked out I tend not to be interested.  The idea is not so much to think of stories, but think of images, situations and predicaments, then worry about the plot later once we’ve got those funny points.

“There’s an unspoken belief among too many people, including writers, that scrips are just dialogue when actually they are also about what happens visually.  I always try and keep the dynamic going of visual joke followed by dialogue passage followed by one-liner, followed by musical joke, and so on, just to keep it interesting and have dynamics.”

Friend of TVO, Matt Berry has also been considering why the show works so well… “You have to have a decent cage.  By that I mean whatever contraption that your main characters are stuck in, whether it is Del Boy’s flat, whether it is prison as with Porridge of the priests’ home in Father Ted.  An IT department in an office is just another good cage I think and that really helps.  If you get that right, your cage where people can come in and out, then your characters can be really funny within it.”

With all of the main cast returning for the show’s fourth season, the biggest surprise is perhaps that Linehan and co. have managed to keep hold of Chris O’Dowd – whose star is rising quite rapidly of late.  After appearing in The Boat That Rocked for Richard Curtis, O’Dowd is set to appear in two big-budget Hollywood productions slated for release this year: with Jay Roach’s Dinner For Schmucks teaming him up with Anchorman stars Steve Carrell and Paul Rudd, and the role of Edward in Gullivers Travels will see him lead a cast that includes Jack Black and Emily Blunt.

And Roy is definitely maturing as the years go by.  Says Chris: “I’d say Roy is coming out of his shell in terms of his social interaction with women.  I think the fact that Jen is in the office has, over the years, made him a little less socially awkward, so even though she’s not what others would call a woman, she has definitely neutralised that aspect of social retardation that he otherwise had.”

But whereas Roy is still trying to get to grips with interaction, O’Dowd is often on the receiving end of a lot of positive praise about the show: “People are very, very positive.  The reaction that I get is really nice.  A lot of IT people really love it and I do hear a lot of women saying: “Oh my god, he’s just like my boyfriend.” and all of that.  And a lot of IT geek girls find Roy very attractive!

“What’s weird is that I live in LA now and I’ve been surprised at how many people in the Apple store do watch the show.  At the end of the first series I had a problem with my laptop and I went in to get it fixed and there was a Polish guy, and I gave it to him and he just said, “Have you tried…?” I said, “Don’t.” And then he just said, “Have you thought about buying a new one?”

Whereas Chris may be reading this very website (in which case – hello there!), Katherine Parkinson rarely touches a computer!  Says Katherine: “I don’t have a laptop.  I appreciate that is a little weird.  When I was at university I did all my essays by hand.  I have a computer and I have a Blackberry which I get all my emails on.

“I can see the advantage of it, however I am not on Twitter and Graham [Linehan] is constantly trying to persuade me otherwise.  I think I would just be permanently anxious because I would want to sort of get back to everybody and my small brain can’t cope with it.  I need to kind of just shut up and have my glass of Cava in front of the telly.

And Katherine sheds a bit of light on why one of the more prolific members of Booshdom appears to have the slightest presence online: “I spend a lot of time with people like Graham and Chris who are quite expert, but I just block my ears.  I have to say that Richard isn’t great with computers, either.”

The IT Crowd returns on July 25th.  The Velvet Onion will be celebrating its launch throughout the week, including an EXCLUSIVE interview with one of its stars, and the results of your favourite episode poll.  For more info, keep on peeling…