Despite stellar reviews from tv critics, mass support from Twitter’s prominent UK celebrities, a Facebook campaign and the work of this very site, we regret to exclusively announce that the BBC has passed on the option to make further episodes of Lizzie & Sarah. 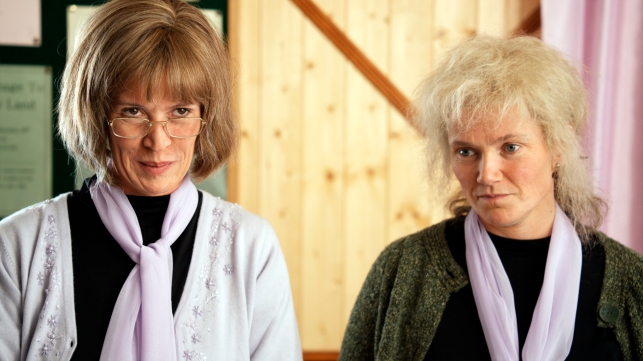 The one-off pilot, written by and starring Julia Davis and Jessica Hynes, was broadcast on BBC2 in a graveyard Saturday night slot back in March, prompting the likes of Noel Fielding, Dave Brown, Simon Pegg, Edgar Wright and Peter Serafinowicz being amongst those who urged their followers to watch. Due to popular demand, the episode was released on iTunes reaching the Top Ten TV Downloads within its first week of release.

But it’s not enough. A comment from make-up supremo Christine Cant at her recent BAFTA presentation prompted The Velvet Onion to contact Baby Cow Productions, who made the episode, for more details, and the news has all but been confirmed – Lizzie & Sarah is no more.

The good news, however, is that we can announce EXCLUSIVELY on TVO that Baby Cow are looking to release a dvd containing the episode alongside various other one-off pilots they have commissioned in the past, and give all of us a chance to see other comedy greats in shows that were never given the chance to shine.  This will also hopefully allow our international readers a chance to see Lizzie & Sarah at long last. As soon as we find out more information about this release, we’ll be sure to let our peelers know.

In the meantime, you can still buy the show via iTunes UK by selling your soul to Apple here.

4 Comments on The End Of The Road For Lizzie & Sarah